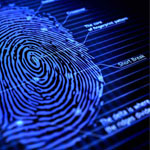 This week covered the recording of known exemplars for use in latent print comparisons. During the first part of the week, the class focused on collecting known exemplars with printer’s ink, alternate ink and chemical methods, as well as, the use of powders and live scan technology.  There was also an instruction block on obtaining postmortem prints under various conditions.

During the week, the students had the opportunity to collect known exemplars (fingers, palms, feet and CFRE’s/Major Case Prints) using several different inking and powder methods, as well as, practice using postmortem spoons and other methods such as Mikrosil and powder.  Later in the week the instruction block on known prints concluded with a demonstration of live scan technology used in capturing and transmitting finger and palm prints.

This week also focused on automation and how it affects examiners on a daily basis.  The students learned about the need for and the history of automation.  This block of instruction included the evolution of live scan and Automated Fingerprint Identification System (AFIS).  Multiple AFIS platforms were explored.

During the week everyone had the opportunity to mark fingerprint minutiae using the Universal Latent Workstation (ULW) software.  The students were also able to enter and search latent prints against a robust finger and palm print database using a fully functional AFIS (AFIX Tracker from AFIX Technologies).